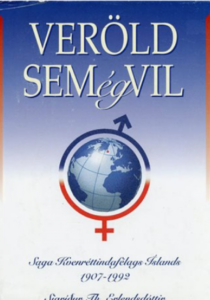 The most noteworthy are Gegnum glerþakið: valdahandbók fyrir konur by Maria Herngren, Eva Swedenmark and Annica Wennström, translated by Björg Árnadóttir, and Veröld sem ég vil : saga Kvenréttindafélags Íslands 1907-1992 by Sigríður Th. Erlendsdóttir. Both of these books are available for purchase at the offices of IWRA, 500 ISK for Gegnum glerþakið and 1,000 ISK for Veröld sem ég vil. 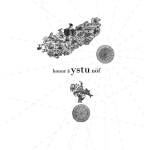 In 2014, IWRA collaborated with the publishing house Meðgönguljóð in the publication of a collection of poetry by women poets from Iceland, Greenland, the Faroe Islands, and Finland. This poetry collection, Konur á ystu nöf, is available for purchase online.

We Should All Be Feminists 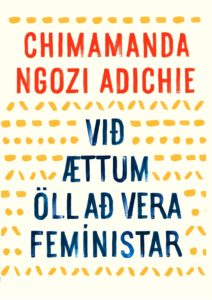 In 2017, on the 110 anniversary of the Icelandic Women’s Rights Association, IWRA gave all first year students at Icelandic secondary schools an Icelandic translation of the book We Should All Be Feminists by Chimamanda Ngozi Adichie, translated by Ingunn Ásdísardóttir. The publication was a cooperation between IWRA and Benedikt Publishers and the book was meant to serve as a starting point for discussions on feminism and gender equality between students and teachers. Við ættum öll að vera femínistar is available for purchase online.

Bibliography of Works by Icelandic Women 1800-1956

The Icelandic Women’s Rights Association and Icelandic Human Rights Office submitted a shadow report to the UN CEDAW Committee in 2016, on Iceland’s implementation of the Convention.

Iceland ratified CEDAW, the Convention on the Elimination of All Forms of Discrimination Against Women, in 1985. On 17 February 2016, Iceland was formally reviewed as to its implementation of the Convention, on Icelandiclegislation and action plans to achieve gender equality. You can read the official report prepared by the Icelandic state for this review, on the website of the Office Of The High Commissioner For Human Rights.

Iceland has gone further than most other countries to achieve gender equality and eliminate discrimination against women, but we have a long way to go to achieve full equality. In preparation for Iceland’s CEDAW review, we wrote a shadow report describing several areas of concern in Icelandic legislation and society, and submitted it to the UN CEDAW Committee. You can read this shadow report here.

Click here to download the shadow report submitted by IWRA and ICEHR to the UN CEDAW Committee for Iceland’s CEDAW review in 2016.

Online Violence Against Women in the Nordic Countries 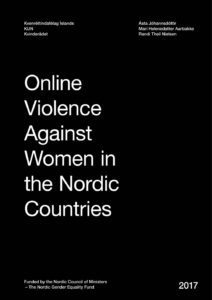 The Icelandic Women’s Rights Association has published the report Online Violence Against Women in the Nordic Countries by Ásta Jóhannsdóttir, Mari Helenedatter Aarbakke and Randi Theil Nielsen. The report was written in cooperation with Kvinderådet in Denmark and KUN in Norway. Each country conducted a study of survivors’ experience of online violence and their search for protection from and justice for that violence, as well as interviewing police and legal actors who have worked with cases of online violence. The report is also available for download in an office printer friendly format.

A summary of the study has been published as a brochure, also available via download, in two different versions (online and printer friendly) and four languages, Danish, Icelandic, Norwegian and English. Download brochure:

NOW – New Opportunities for Women are six self-study courses aimed at women to enhance personal development, social empowerment and leadership assets. These courses are available in English, French, Greek, Icelandic and Portuguese. The courses were created by IWRA in cooperation with Evolve Global Solutions Ltd in the UK, CSI Center for Social Innovation in Cyprus, Future in Perspective in Ireland, IASIS in Greece, ITG Conseil in France, Instituto para el Fomento del Desarrollo y la Formación in Spain, the Icelandic Women’s Rights Association in Iceland and Mindshift Talent Advisory Ida in Portugal. The six courses are:

The project was funded by Erasmus+.