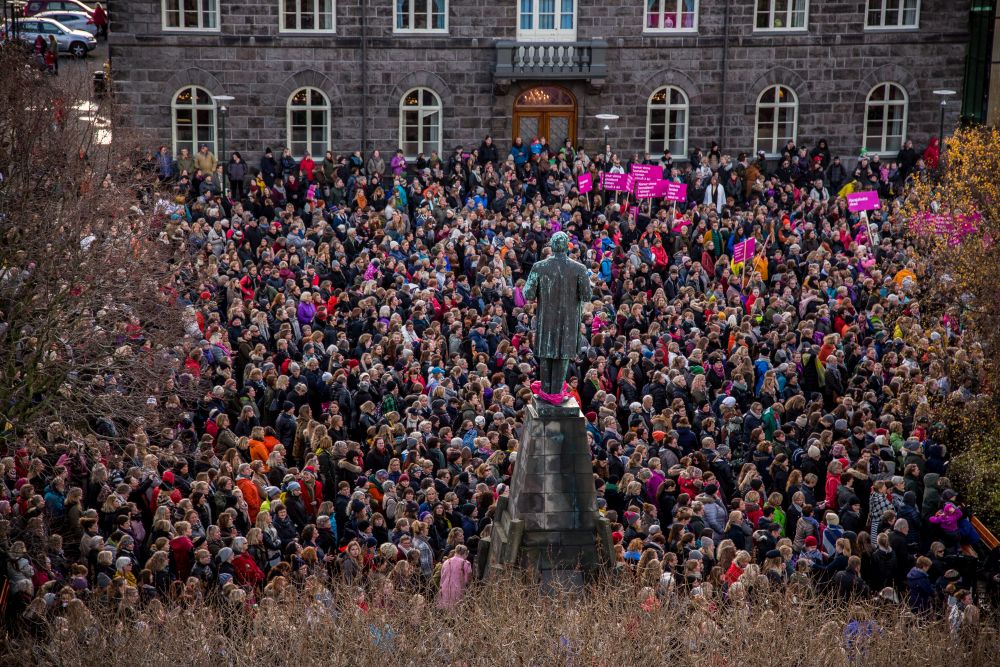 This post was written in March 2017 and is outdated following changes to Icelandic legislation.

Read an updated guide to equal pay in Iceland and the Equal Pay Standard here!

On March 8, 2017, Prime Minister Bjarni Benediktsson announced in a meeting in New York that Iceland planned to mandate equal wages for men and women. Since then, there has been a flurry of interest from the international news media about the proposed legislation. In response, we are posting a few quick facts.

Firstly, Iceland already has a legislation which is supposed to guarantee equal pay for men and women. In fact, we passed the first legislation mandating equal pay for men and women in Iceland over half a century ago, in 1961. At the time, the members of Alþingi, the Icelandic parliament, were hopeful that full pay equality would be reached in only six years, in 1967. Perhaps a naive hope, but then again, what can we expect from a legislative body which at the time had only two women members :D.

Unfortunately, economic gender equality was not reached in six years. So we in Iceland passed a new comprehensive Equality Act in 1976, and one of the articles stated that women and men be paid the same for work of equal value. Alþingi passed yet another updated Equality Act in 2008 with the same provision that men and women be paid equally for equal work. Still, men are still being paid more than women, despite legislation which is supposed to guarantee equal wages.

The legislation which now being proposed in Iceland, will require companies to prove that they are paying men and women equally, by obtaining an equal pay certification. The proposed legislation will mandate companies and entities with 25 employees or more to implement the Equal Pay Standard. This effort is a stated policy of the current coalition government of Iceland. The government’s platform specifically states: “Equality in the broad sense is an integral part of a just and fair society. Labour-market equality is a an important aspect of this. In order to fight gender-based wage discrimination, any company with 25 or more employees will be required to qualify for equal pay certification each year.”

The Equal Pay Standard was written in cooperation between the labor movement, the employers‘ confederation and the ministry of labor and finance. The standard is a set of rules and guidelines which analyze the pay structure within a company, and show whether or not men and women are paid equal wages for the same or equal value of work within the workplace. When companies and institutions have fulfilled the requirements of the standard, they can ask for certification that they have complied with the standard.

We at the Icelandic Women’s Rights Association are hopeful that legislation mandating this standard for companies and entities with 25 employees are more will pass, once it is submitted before the parliament. In fact, this legislation would be a logical next step in our efforts in Iceland to combat gender inequality and the gender pay gap. In current Icelandic law, companies with 25 or more employees are already required to have an equality plan; and boards of companies with 50 or more employees are required to have gender parity (60/40 at least).

The Equal Pay Standard was written to conform to international standards and accepted practices in ISO standards, and our hope is that it can be translated and implemented in more countries around the world.

We have collected all the information about the Equal Pay Standard available in English online. Click here to read more.

The Gender Pay Gap in Iceland and Women’s Day Off

One of the main reasons women work fewer hours in Iceland than men, is that women are performing unpaid labor in the home and for the family. We at the Icelandic Women’s Rights Association believe that we need to look to the larger unadjusted figure to measure the gender pay gap, not the lower figure adjusted for working hours.

Women in Iceland have walked out of their jobs five times in the last 42 years to protest the gender pay gap.

On October 24th, 1975, women all over Iceland left work, to demonstrate the importance of women‘s contribution to society. This day was popularly called „kvennafrí“, or Women‘s Day Off. In 1985, 25,000 women left their work again, to protest income inequality. In 2005, we celebrated Women‘s Day Off for the third time, and tens of thousands of women left work the minute they stopped getting paid, at 2:08 p.m. In 2010 women in Iceland again left work, this time at 2:25 p.m.

Today, the average wages of women in Iceland are only 70.3% of the average wages of men. Therefore, women have earned their wages after only 5 hours and 38 minutes, in an average workday of 8 hours. This means that, if the workday begins at 9 a.m. and finishes at 5 p.m, women stop being paid for their work at 2:38 p.m. So, on October 24, 2016, women in Iceland left their work at 2:38 p.m to protest income inequality between men and women.

We have gained only half an hour in eleven years. Less than three minutes per year. If progress continues at the same pace, we will need to wait another 52 years before women in Iceland have the same wages on average as men, in the year 2068!

Previous Post7% of films in Icelandic cinemas in 2016 were directed by women: A new Nordic evaluation of gender (in)equality in film screeningsNext PostGender equality in the labour market and equal pay: The Icelandic approach
0Shares