International Alliance of Women expresses its strongest solidarity with the women in Ukraine and their families in this situation of utmost suffering because of the illegal war of aggression by the Russian government. This war gravely violates the UN-Charter, which is international law including the standards of human rights. Further, it violates the Right to Peace adopted by the UNGA in Nov. 2016.

We urge Russian and Ukrainian authorities to agree immediately to a cease fire, to return to the negotiating table to re-establish, under guarantee, the sovereignty of Ukraine and to work honestly for a win-win situation on an equal footing. Only then can lasting peace for all be envisioned. Every military victory is laying the ground for the next military conflict. Any escalation needs to be stopped without delay.

The UN resolution 1325 (2000) and many National Action Plans provide for women the right to meaningful participation in all phases of peace processes on all levels of decision making. This must be acknowledged and implemented in the peace settlement between Russia and Ukraine.

We urge you to bring women of both sides to the peace negotiating table to build an enduring peace!

We also appeal to all governments that can offer good services to bring the peace process to fruition. We appeal to all countries in Europe or elsewhere to open their borders to let all refugees pass and to supply humanitarian aid and life-saving support.

We call on all governments: establish and secure a humanitarian corridor out of Ukraine cities under attack and from rural areas to guarantee access to all Ukrainians to aid and assistance by proven humanitarian organizations, to receive medical treatment, food and drinking water, everything they need now, as well materials and assistance to rebuild the destroyed infrastructure in Ukraine immediately.

We support everything that has already been done by governments and by civil society to this end. UN resolution 1325 also gives the right to women and girls to be protected from all forms of violence in war and armed conflict including gender based violence. Ukraine women’s organizations must be involved and financed to provide their urgently needed expertise and services.

We call on UN Security Council and UN General Assembly to call on the International Criminal Court: no impunity for war criminals!

Lay down your arms! 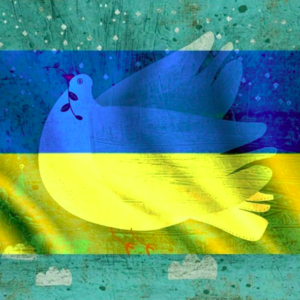